It was one year ago today that I slipped into septic shock.

It’s eerie to look at the Facebook posts leading up to that day: a couple had me randomly making mention of “leaving the Earth” and the “rest of my life,” and then you have one of me saying my medical plan had gone awry. I seemed pretty calm. 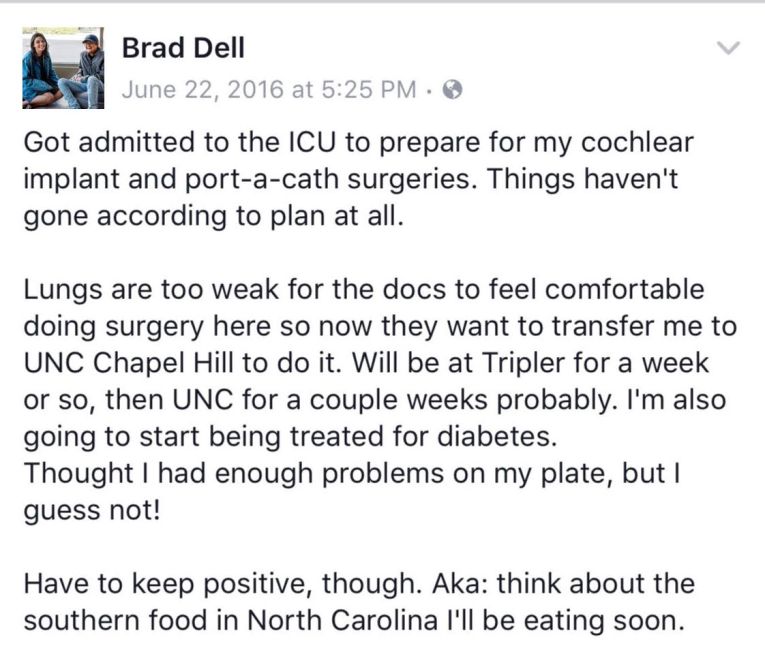 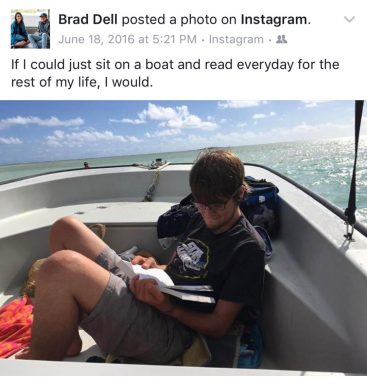 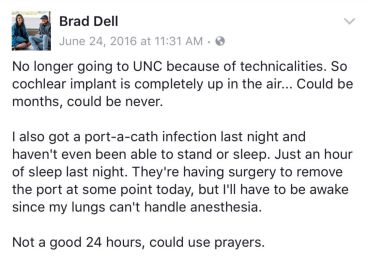 That calm only lasted a few more hours before the psychosis hit me (something I talk about in my last blog post).

Since that time, I have become familiar with death: both in almost dying, and having loved ones die of lung illnesses.

I wrote the following essay the night before I got my call for transplant — good timing. Death was an unavoidable topic. It wasn’t posted yet thanks to the chaos of transplantation and recovery. To keep my thoughts from that night intact, I haven’t changed a word in it.

I dedicate it to Sabrina, William, Alyssa, and Grandma Christine — all beautiful souls who I built mutual support with before they passed from their battles with COPD, Cystic Fibrosis, and lung transplantation.

I had spent 23 years avoiding the topic of death, painfully aware of it lurking behind every corner, afraid to meet its eye. Death was frightening. It’d been frightening from the moment I learned of its existence, to the time I started sobbing in church as a kid because I didn’t want to go to heaven (I thought it would be an eternity of listening to boring sermons and singing), to the time I saw the average life expectancy of someone with my disease in my 8th grade biology textbook. Then I’m sitting there in my hospital bed, in June, knowing I finally looked death in the eye. So, that’s how death happens, huh? And I wasn’t so afraid anymore.

I’ve been reading a lot of obituaries. An obituary usually has a sentence or so about the death itself followed by a long detailing of legacies. There are often a couple sentences that attempt to summarize a person’s entire character. It ends with a list of loved ones the person left behind. I read these obituaries and imagine mine, as morbid as that is. What positive legacies do I leave behind? Which adjectives summarize ‘me’? Which loved ones will be listed—will I be married and have children? More importantly, did I treat my loved ones lovingly? I can think of an ideal obituary. I would not have liked what it said if I died in June. Of course, there’s rarely an obituary that says anything but nice things about the person. But the ideal is that those who know the person can read the obituary and say, “That’s them.”

Death could strike at any moment. Yes, the lung transplant could save me and add many years to my life. But I’m not out of the danger zone yet, and carrying transplanted lungs is risky in itself. It doesn’t even have to be my disease; I could get hit by a car after writing this. It could be any moment. I want to make sure my last days—whether they are this week or decades from now—are defined by love.

I used to say that it was a curse to live an entire life knowing I will have a relatively premature death — whether I wanted to acknowledge it or not, it was always in the back of my mind. Now, I’m starting to think of this slow-burn death as a blessing. I don’t have the irresponsible luxury of being able to think, “I’ll change later.” If I want to be who I want to be, I need to embrace that now is the time to do it.

I want to be a person whose life is led by love. I know that is roll-your-eyes philosophy. The ‘power of love’ is cliché, right? But as someone who is having to confront the idea of death every single day, please believe me when I tell you love really is as important as the poems, songs, literature, religious texts say it is.

I can’t think of death without thinking of love. Death and love mean so much to each other. Even Biblically, love and death are eternally entangled — Jesus’ sacrifice. The great thing is, because of that sacrifice, love has power over death. Because of God’s love, I have confidence in what awaits me on ‘the other side.’ Because of my family and Kristina’s love for God, my death will not sting them as painfully. Because of precious moments where love is on display in my life, I can live joyfully and die joyfully.

This brush with death gave me new life. A second chance. I have a lot of work to do. I can be so much better, and I want to be.